[UPDATED: Nov. 4th]
Thank you for all who followed us on Twitter for our trip to SEMA this year.  (if you missed it, you can still look back at our photo updates GReddy_Power Twitter.)

Some of our favorites of this years show were:

HPD: Honda Civic Si (body in white) bare chassis, that you can actually order to make a racecar - we hear it should be around $3,500.  And Five Axis concept take on the new Lexus GS-F.

We also liked seeing our little brother version of the GReddy tC, this one was similarly built by Dynamic Autosports / Group S for Bucky Lasek to race next year.  The Scion Booth was also definitely the place to be at this year's SEMA Show, especially during the iQ Tuner Challenge announcement.

Some other project we found interesting were, GR Master Tuner, Jotech's many R35 that were at the show. Another was, Authorized GReddy Dealer RMR, with their V8 Genesis powered Coupe with a GReddy SE exhaust.

We also spotted the new livery of the Sparco/ScionRacing Rally xD, we turbocharged and a 4.3L GReddy VR engine with JE Pistons and Innovate gauges.

Normal GReddy Business hours apply for the week of Oct. 31 through Nov.4, however some GReddy staff members will also be visiting the 2011 SEMA Show (aftermarket auto accessories convention, in Las Vegas)

For live updates from the show (and after) as we roam Las Vegas, follow us on Tuesday, Nov.1st and Wednesday, Nov.2nd via our official GReddy_Power twitter account... 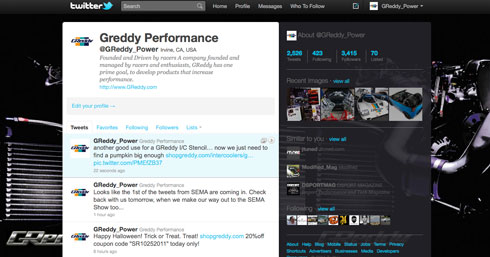 UPDATE:  See GReddyUSA Tumblr: for our photos at the event.  Or see our friends at HPI Racing RC for more event pics.


_ _ _ _ _
This coming Tuesday, Oct. 25 the #11 GReddy tC will be on display at the largest Scion owners event there is... Fright Night: Scion Night at Knott's Scary Farm in So. California.

See the production GReddy Tuner Turbo Kit for the Scion tC2 in person.  Look for GReddy tent will be next to the big black Scion Racing U.U.V. activation truck.  The Scion tailgate party will be from 1:00-6:00pm.

Another great way to keep up with GReddy is to visit or follow us on our official GReddy USA tumblr.  There you'll see more of a visual blog from us.  Even exclusive photos, you may not see anywhere else...  So check it out... updates will be frequent! 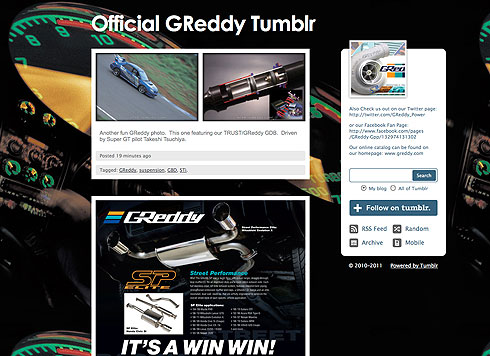 http://greddyusa.tumblr.com/
Posted by GReddy USA at 11:53 AM

As of October, 2010, GReddy is proud to announce our official membership on a premier North American Scion owner's forum ScionLife.com.

Scion enthusiast, please see our introduction thread for more details about our involvement.  Leave us a hello comment on our thread, and we'll keep in touch on ScionLife.

And if you have a suggestion on another vehicle specific enthusiast owner's forum we should consider joining, please email us at greddyusa@greddy.com

For the month of October, ShopGReddy.com orders get FREE shipping for exhaust purchases.  This also includes, pre-orders, for the brand-new RS and SP elite models that will be here by Oct. 18th. (Ground shipping, within the continental USA 48states, for other areas please contact: shop@greddy.com)

This week we would like to share Episode #25 of the on-going video diary of Formula Drift Ace, Dai Yoshihara.  It's called "Behind the Smoke" and it is brought to you by GT Channel.


This weekend is the Formula D final at Irwindale Speedway.  Dai goes in with the points lead and we want to wish him the best of luck to come out with the 2011 Championship. We'll be routing for you Dai!