The first batches of Supreme SP for Lexus RC350
and Revolution RS for the Subaru (GVB) WRX/STI. 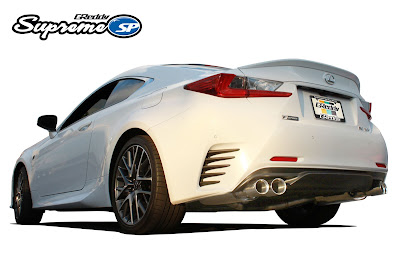 The Supreme SP for the 2015-on Lexus RC350 features up to a 10whp gain, with a sophisticated exhaust note and an aesthetically artistic design.  The classic dual oval muffler axle-back system with large free flowing 63.5mm (2.5”) piping produces no exhaust drone. Thanks to the two large SP mufflers, it has excellent sound suppression at idle and cruising.  In spirited acceleration, the straight-through design makes the exhaust comes to life with a deep rich GReddy sound.  The unique quad tip configuration, using two different diameters in an unique layout, best matches the styling of the vehicle.  Like all GReddy Supreme SP systems the fully hand-welded 304 Stainless-Steel exhaust carries a Limited Lifetime Warranty. 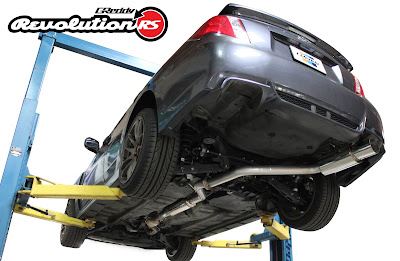 The Revolution RS for the Subaru WRX/STI sedan features full 3.0” diameter piping for superior performance. Dyno test have shown increase in 12hp and an amazing 32ft-lbs of torque. The purposeful single-sided cat-back layout with minimal bends produces a cost-effective, light-weight system. Classic GReddy styling positions the muffler and tip stylishly underneath the right side of the car while matching the profile body-lines perfectly. Like all GReddy Revolution RS systems the fully hand-welded 304 Stainless-Steel exhaust carries a Limited Lifetime Warranty.

With the 2016 Formula Drift Pro Championship Irwindale Finale coming up quickly in early October, let's take a quick review at what happened at the last round, rd.7, on Sept. 9-10 at the Texas Motor Speedway... 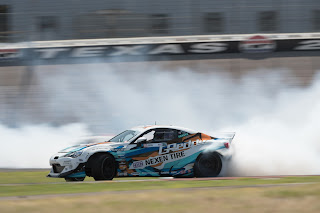 The race week started off great for the team.  Thursday practice went well and the GReddy Racing - Nexen Tire - SR by Toyota 86 was dialed in quickly, for the high speed FDTX track.  Friday Qualifying also went well with Ken earning a top scoring of 96pts to tie the top four drivers for 4th place going into Saturday's tandem battles.

(Click here to watch the top 5 Qualifying runs from FDTX)

But during Saturday's final morning practice, a mechanical issue arose. It was discovered the back-up 2JZ engine would have to installed.  But with little time for an engine swap before the Top32 bracket, the team decided to take the risk to run the hurt engine in Top32.  Luckily for the team, Gushi tandem opponent had conceded the battle due to a similar engine problem, requiring Ken to just run a solo lap to move onto the next bracket.  This gave the GReddy team enough time to make the need engine change and get Ken out in time for the FDTX introductions and Top 16...

The #4 Qualifying, GReddy Racing - Nexen Tires - SR by Toyota 86 of Ken Gushi faced off, for the first time in competition, Kristaps Bluss' E46 BMW.  That BMW was one of the fastest vehicles on the course that day.  The two were evenly match and the battle were very close, so close, the Judges requested them to re-run a OMT battle. (1st match up - Video by Network A)

Again the 16-OMT battle was very close.  And with the excessive smoke trails and darkness it may have been difficult to evaluate the entirety of the runs, but in a divided decision, Bluss got the win, ending our event much earlier then we had hoped. (OMT battle - Video by Network A)