The Supreme SP, for the Hyundai Veloster, features an excellent combination of performance and sound. Large 76mm (3.0”) mandrel-bent piping is carefully routed underneath the compact chassis to an extra large resonator and compact, rear mounted, oval SP muffler. To finish off the system, a smooth dual 63.5mm (2.5”) split leads to a functional, remote center exit with 102mm (4.0”) GReddy engraved tips. Power tests have shown increased performance throughout the power-band, with peak gains of 12whp and 6ft.lbs. Sound is well controlled for street use, with no passenger compartment drone. Like all GReddy Supreme SP systems the fully hand-welded 304 Stainless-Steel exhaust carries a Limited Lifetime Warranty.

#REPOST: Guinness World Records by Rachel Swatman
Published 08 April 2016
Nissan Middle East FZE has sped into the record books after extremely brave driver Masato Kawabata (Japan) achieved the Fastest vehicle drift ever at a staggering 304.96 km/h (189.49 mi/h), while driving a Nissan GT-R Nismo during an event at Fujairah International Airport, UAE, last month.
The drift champion broke the Guinness World Records title three times at 273.39, 304.96 and 296.79 km/h with an angulation of 55.21°, 33.56° and 34.42° respectively, traveling down the 3 km long airstrip.
video
Kawabata and Nissan significantly bettered the previous record of 217.973 km/h (135.44 mi/h) which was achieved by Jakub Przygonski (Poland) at Biala Podlaska Airport near Warsaw, Poland, in 2013.
The Nissan GT-R Nismo car used for the attempt was specially-tuned by GReddy Trust in order to maximize its agility and stability.

Samir Cherfan, Managing Director of Nissan Middle East commented on the incredible achievement: “Once again, Nissan has again broken a Guinness World Records title and has made international history in the UAE. The GT-R Nismo is one of the world’s most iconic supercars, proving time and again the incredible breadth of its capabilities, and has clearly demonstrated its performance leadership by beating the best drift cars out there.”

Not the first time this vehicle has entered the record books, a Nissan GT-R achieved an acceleration of 0–60 mph (0–100 km) in 3.5 seconds while completing a lap of the Nürburgring circuit in Nürburg, Germany in 2008, to earn the Guinness World Records title Fastest 0-60mph acceleration by a four seater production car.
Posted by GReddy USA at 2:09 PM 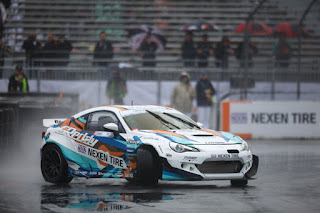 "Round 1: Streets of Long Beach kicked off the new season in dramatic fashion. The volume of rain, the variable surface conditions of the street course, which made for treacherous conditions in general during Friday’s practice, created a rain delay, which ultimately resulted in the Series making the decision to draw on a provision of the Sporting Regulations that allows the Series to forgo Qualifying in the face of inclement weather. Drivers were placed into the Top 32 bracket based on their 2015 ranking. The weather held up for the main competition and the drivers were able to give the fans a great showing to start the season..."

Saturday's main competition day, started off dry, but just before the Top 32 match up of #2 qualifier, Ken Gushi's Toyota 86 vs. Faruk Kugay' 2JZ-powered Nissan S14, rain began to fall.  With great control, Ken drove great lead line in the slippery condition and avoided contact in the chase position, when his opponent made contact with the wall.  Ken took the win. 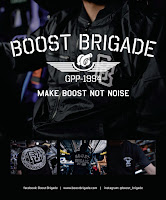 During the Formula Drift Half-time break, the GReddy Team debuted the new Boost Brigade Spring Collection.  It was great to see many fans support the new brand in the stands.  For more info. see the new online store:

Luckily as the weather cleared up during the break.  It allowed for a mostly dry exciting competition to the end of the event.  With packed Long Beach grandstands, the 16 brackets saw Ken Gushi advanced pass the VR-powered G37 of Charles Ng, with solid lead and chase runs.

In the Great 8, Ken Gushi went against Forrest Wang's 2JZ-powered Nissan S14.  Similarly to the his 32 battle (except in the dry) Ken laid down a dominate lead pass, building a large gap, which pressured his opponent to make a mistake in the 2nd run. This moved the the GReddy Team onto the Semi Finals.

In the Semi Finals, the GReddy Racing Nexen Tire SR by Toyota 86 of Ken Gushi faced off with the eventual round winner, Chelsea Denofa in his BMW E36.  In one of the most evenly matched battles of the day, (which could have easily went OMT -one more time), the Judges awarded Denofa the win. And with SR by Toyota teammate, Frederic Aasbo taking, second, Gushi was award the final podium spot.


The 3rd place finish in #FDLB, continues the podium streak for the GReddy Racing Team (2015 FDTX & FDIRW) and starts of the 2016 Pro Championship charge for Ken Gushi, while contributing to the SR by Toyota lead for the FD Manufacturer's Cup and Nexen Tires for the lead in the FD Tire Manufacturer's Cup.

Cheer on #21 Ken Gushi in the Formula Drift season opener on the Streets of Long Beach.
April 8th-9th with his 865whp GReddy 2JZ Toyota 86

- (Watch it via the livestream: http://www.formulad.com/live) schedule of events below. 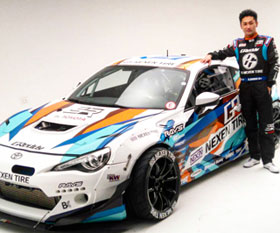