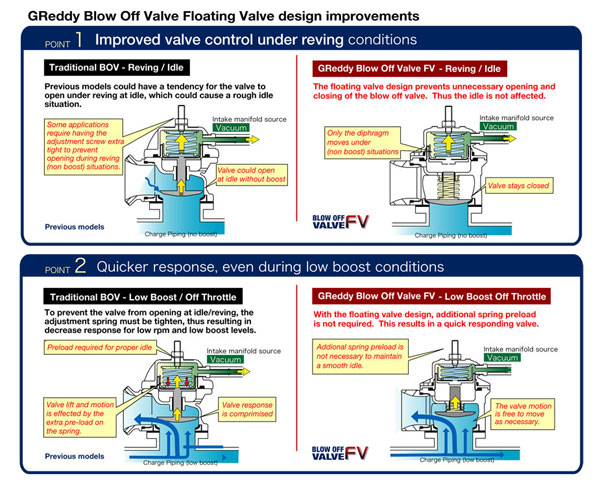 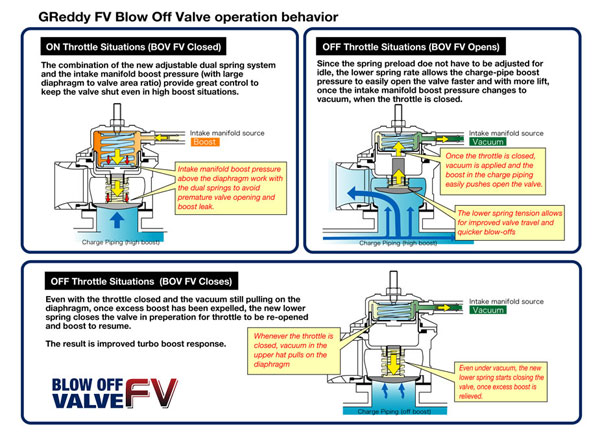 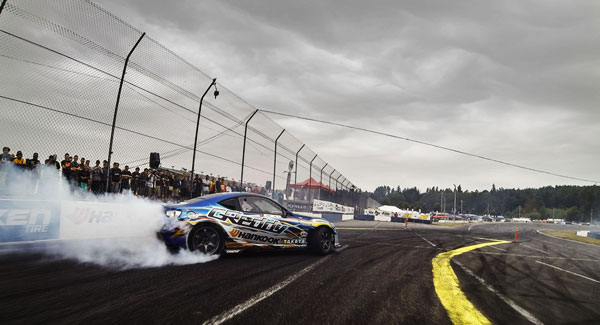 Over the weekend the GReddy Performance X Scion Racing Team competed in the North-West, near Seattle at the Evergreen Speedway for round 5 of the Formula Drift Pro Championships...

If you are familiar with the current Formula D qualifying process. The first round of Qualifying scores lock the top 16 cars into the top 16 positions, then the rest of field (17-on) make a second run to determine the rest of the field.  So with Ken Gushi getting a surprisingly lower then expected 77.5pt for 16 spot, we end up with a tough elimination bracket.  The highest scoring driver (89pt.) in the second round of qualifying for Top32  (who is usually a top driver that just made a mistake in the 1st run) followed by the Number One qualifier (97.5pt) from the first qualifying session in Main 16 eliminations bracket. So this was the situation for round 5...

In the morning Top32 eliminations, driver Ken Gushi drove hard against the #17 Qualifier, Denofa, in his turbocharged straight 6 BMW to take a close win, advancing him to the Main event and Opening ceremony festivities. 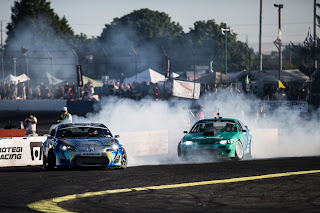 After some frantic repairs over the "half time break" Ken was back in the FR-S for Opening Ceremonies and the Main 16 Eliminations, against #1 Qualifier, McNamara in his V8 powered S14 Silvia.  Knowing it would be a fierce battle of high speed drifting, Ken drove hard but came into the infield section a little too "hot," knocking down a "Zero point" cone to end his chances to continue on.


We would like to thank all the fans and partners for their support.

Just in time for your Summer tuning!  Don't miss out on Summer discounts.

Checkout these specials on Overstocked Exhausts:

*Savings on many more applications in the SP Elite, RS, Evo3, Racing Ti-C and SE


In 2012 we had our best finish yet as a team, nearly missing the podium.  Cheer us on this year as we strive to better our performance for the Seattle fans! 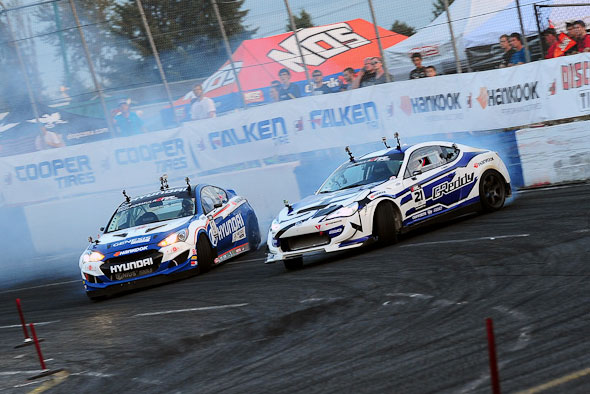 Driver Ken Gushi explains the changes made in the off season on the GReddy X Scion Racing Drift FR-S for the 2013 Formula Drift Pro Championship Season. 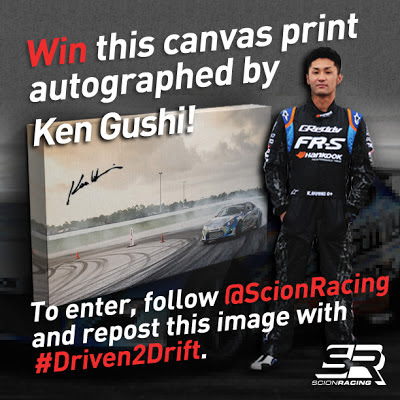 zWith back to back race weeks for Formula D New Jersey and the historic Pikes Peak International Hill Climb, the GReddy Racing / Scion Racing Teams were very busy in June. 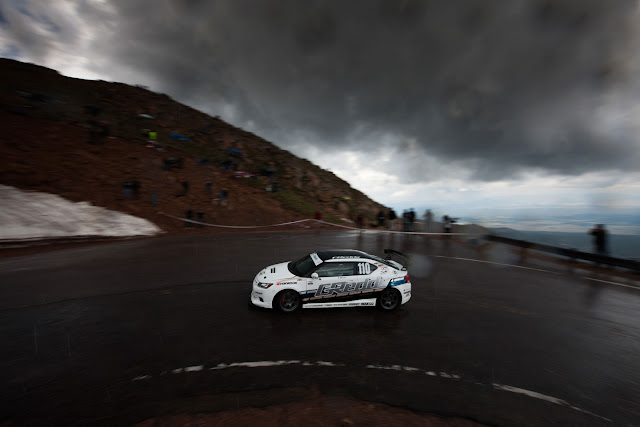 2013 would be the Team's 2nd year competing with the Scion Racing at Pikes Peak on the 12.42 mile course.  Weather conditions were good throughout the week's practice/qualifying sessions. And the GReddy crew was more familiar and prepared for the grueling week of 3:00am set-ups, high altitude, and long hours on the mountain.  Driver Takeshi was also noticeably faster and more comfortable on each of the three practice sectors of the dangerous Pikes Peak course.


Takeshi in the GReddy / Scion Racing tC qualified 8th out of 21 cars in the Time Attack division with a 4:45.356 over the lower section from the starting line to Glen Cove.  This was the quickest front-wheel-drive time in the class, barely ahead of team-mate ACP in the Rally xD  with a 4:45.605.


With a time of 12:08.606 in the 2012 Exhibition class for Takeshi's rookie year and the Team predicted and targeted a low to mid 11minute time for this 91st running of the Pike's Peak Hill Climb, baring any big mistakes, breaks or adverse weather conditions.  But the true test always comes on race day, when you finally get one run up the entire course.


That being said, when the actual race day came on Sunday, June 30th and it was time for Takeshi to make his official timed run over the complete 156 turn course, it began to rain, hail and snow on different parts of the mountain. And that is what makes the Pikes Peak International Hill Climb such a challenge - Driver, Car and the Mountain.

Although it was sunny at the starting line, by the time Takeshi reached the infamous "Engineer's Corner" (less then half way through the lower sector) it was pouring rain.  Then by "Glen Cove" there was hail and towards the top sector it was snowing!  But with great skill, Takeshi and the GReddy / Scion Racing tC made it up safely up to the 14,110ft summit in a respectable 13:20.045 in severe weather conditions.  Takeshi and the entire GReddy Team is very proud and honored to have competed and completed this historic and challenging race again with the Scion Racing!

We are also happy to report all of our fellow PPIHC Scion Racing Teams were also successful in making it to the summit of Pikes Peak.  Veteran driver ACP really showed his rally experience, piloting the GReddy-Turbocharged Scion Racing RallyxD in similar severe weather conditions to an impressive 12:55.739, while rookie Pikes Peak driver Robert Walker drove an excellent race to the summit in the Scion Racing / Evasive Motorsports FR-S in just 10:59.744 in the Unlimited Class with good weather, earlier in the day.

And on a full wet course later in the day with even worst weather, our very own Formula D drift driver, Ken Gushi showed a dominating Exhibition class winning 12:03.085 in the famous Lexus CCS-R IS-F (who in good weather conditions might have even been able to make in the 9minutes.)

Congratulations to the record smashing (8:13.878) Sebastien Loeb in the amazing Peugeot 208 T16 and to all the other 2013 Pikes Peak Teams, we hope to join you again in the future...


other photos by Randy Ly and Rafa Alejandro Herrera 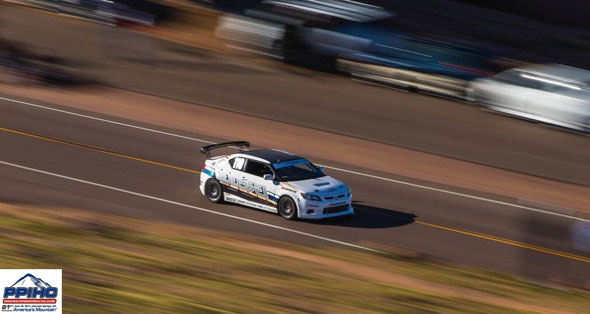