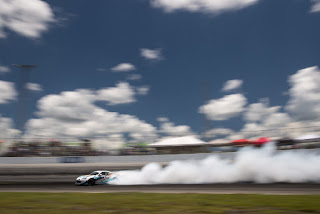 Ken Gushi and the GReddy Racing - Nexen Tires - SR by Toyota 86 Team fought the Orlando heat on their way to a Formula Drift 6th place finish in round 3 of the Formula Drift Pro Championships (and moving back to 6th in the championship with 5rounds to go...)

Looking to repeat, his Top Qualifying result from 2015, Ken laid down a solid first Qualifying pass, netting 89pts, but as trying to better the second run, he ended up making contact with the high speed banked wall.

After an evening of repairs, the team got the SR by Toyota 86 back to 100% for the 32 bracket of eliminations.  In the first battle on Saturday, Ken drove a smooth and clean lead run which made for  an exciting battle with "Mad Mike's" twin turbo 4rotor MX5 chasing.  In the end, a tire de-beading incident ended the day for the Miata, resulting in a solo 2nd run and easy win for the GReddy Racing Team. 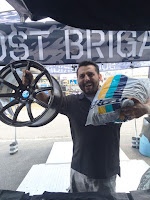 During the Formula Drift halftime break, Ken signed autographs and displayed the new Boost Brigade line to the Orlando fans.  Two lucky fans even won the damaged Gram Lights 57Transcend wheels off the 86, in the Friday qualifying run crash.

The 16 bracket eliminations matched up Gushi vs Bakchis's LS-power Genesis.  After a split decision, Ken upped his smooth performance in the OMT battles with a more aggressive line on the bank and added better proximity to take the win.

The 3rd round in the Formula Drift Great8 brought another tough match-up.  2014 series champion, Forsberg and his V8 NOS powered 370Z.  Again the battles were very close, but a small mistake taking out the 2nd clip on the chase run was enough to open up a gap on the infield.


The next event is just around the corner,
Formula Drift Wall Speedway, #FDNJ - June 17-18