Watch Sliding Places from FDTX before the Finale in Irwindale

Cheer on Ken Gushi and the Team GReddy Racing - Nexen Tire - Toyota Racing 86 Team this weekend at the House of Drift!

Also check out the Team GReddy Racing Sliding Places, Episode 8 from Texas for behind the scene form the last round... 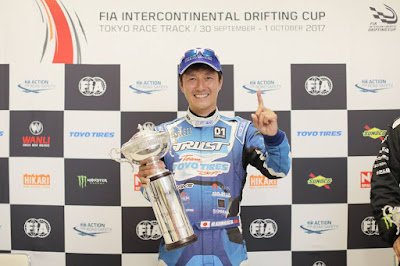 Japanese driver makes history in Tokyo ahead of Tsaregratsev and Saito
Masato Kawabata has won the first ever FIA Intercontinental Drifting Cup, topping the points ranking across the two legs of Solo and Battle competition which have taken place in Tokyo this weekend (30 September – 1 October). Arkady Tsaregratsev secured second place overall for Russia ahead of third-placed Daigo Saito, who also walked away from the event with the cup for overall best in the Solo Run.
The second Leg of the event began this morning with the Solo Run, as drivers ventured out alone to try and score maximum points across the course’s five scored sections.
Scoring in the FIA IDC is carried out by the Judges, who also have at their disposal an electronic device system developed for D1 Grand Prix which provides accurate data to help inform their decisions on each run.

Yesterday’s Solo winner, Saito, was unable to reach the same level as he had previously, scoring in the 98s across both of his runs today leaving him in fifth place. His main rival from Leg 1 and compatriot Kawabata looked to have done enough on his first attempt through the course with 99.70 points, but was handed a two-point penalty for going out of bounds which demoted him to fourth place.
This meant three new drivers would reach the podium for their Solo Run efforts. Thai driver Daychapon Toyingcharoen almost broke the 99-point barrier with a 98.96 in his second run to secure third place behind Russian ace Arkady Tsaregratsev who impressed with a 99.21 in his opening gambit.
Victory, though, went to Japan’s Masashi Yokoi, who just did enough in his second run to top the table by a tiny margin of 0.13 points.
Despite not scoring a podium today, Saito’s stunning performance yesterday and a solid Sunday showing was enough to take victory in the overall FIA Intercontinental Drifting Cup for Solo Run.
The top 16 scorers from the morning’s action were then paired off for the final phase of the event – the Battle Run.
The afternoon session provided plenty of drama as 16 of the world’s top drifting talents competed inches apart in a bid to secure a place in the final. Like yesterday, there ended up being an all-Japanese and an all-Russian semi-final. The Russian run certainly brought excitement to a fever pitch, as Tsaregratsev and Georgy Chivchyan ended up level on points, forcing a tie-breaker. The pair’s second battle was incredibly close, and under the huge pressure of the chasing Tsaregratsev, Chivchyan made slight contact with the wall and lost his rear wing, along with a chance of being in the final.
The #19 driver would, however, win his third-place playoff Battle with earlier Solo winner Yokoi, ensuring he had a place on the podium at the end of the day.
This left Tsaregratsev and Kawabata in the Leg 2 finale, and there was still more excitement to come before the overall winner of the FIA IDC was decided. In the first run, with Kawabata leading, there was almost nothing to separate the two top drifting talents, however in the second run, Leg 1 winner Kawabata pushed too hard entering the third scored section of the track and ended up overtaking his rival.
This error meant that the delighted Tsaregratsev claimed victory in the Leg 2 Battle Run.
With the scores for each Run across both Legs tallied up, it was clear that Kawabata, despite not quite scoring a win today, was the top driver over the weekend. He was ten points ahead of Tsaregratsev, whose strong Sunday performance ensured a place on the final podium for him, while Saito was a further seven points behind.