Ken Gushi and the GReddy Performance X Hankook Tire X Scion Racing FR-S Team, place 5th in Round 4 of the Formula Drift, #FDNJ, to hold the 4th position in the Pro Championships... 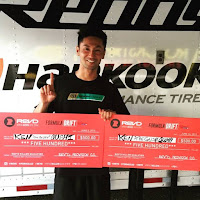 With near perfect runs, Gushi scores back to back Top Qualifier results in #FDOrlando and #FDNJ.

Unfortunately the unpredictable weather conditions of Saturday's main event, made the 1st spot a little bit of a disadvantage, having to be part of the first group of tandem battles in the eliminations.

Top 32 started off on a windy but dry course with one of the closest battles of the day for the GReddy Team, with Ken going against the aggressive driving of Nate Hamilton and his turbo V8 S13.  But a great run on the bank with lots of angle by Gushi got the approval of the Judges to move on.

After the Formula Drift half time break and opening ceremonies, Ken took on the supercharged V8 S14 of Matt Field.  On a super slick track, Ken taps the guardrail on the lead run initiation onto the bank but keeps going, unfortunately Field ends up spinning.  Ken follows with a safe chase run until Field spins again, giving Gushi the win. 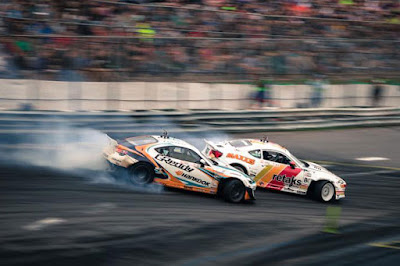 The Great8 battle paired up the two 2JZ powered FR-S in the series, Ken Gushi vs. Ryan Tuerck.  With the wet but drying track, it wasn't the cleanest run for Ken in the lead position, so when it was time for Ken to chase, he attacked like he was in his practice "missile" car.
This following run by Ken was probably one of the most enjoyable runs to watch in the wet.  check out this fan video for the door to door run...(video clip)


With 3 more round in this year's series, look for the GReddy Team to charge hard for valuable qualifying results and that top step of the podium in our chase for the Championship.

The last leg of this east coast events, is Rd.4 in Wall New Jersey this weekend.  Look for Ken Gushi and the GReddy Racing Team to push hard to move up the Championship rankings. 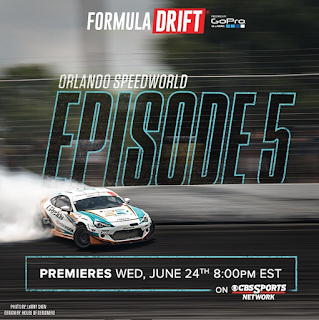 After Ken's 2nd in Atlanta and 3rd in Orlando, the team is 4th in Formula Drift Series.

To catch up on the action from Orlando, you can watch the Formula Drift CBS Sports.

It airs this Wednesday, June 24th at 8:00pm EST on the CBS Sports Network.

The PPIHC is America's 2nd oldest race. And this epic high altitude competition only takes place once a year, when the full 12.42 mile course is open to race on it's 156 treacherous turns.  Our racing team will be in New Jersey for Formula D Round 4. With our commitment to the Formula Drift schedule, we will be unable to field our own challenger in the hill climb, but we are proud to lend our experience and support to our Scion Racing teammates, with the Scion Racing - Mackin Industries FR-S (supported by Evasive Motorsports) in the Time Attack 1 category. 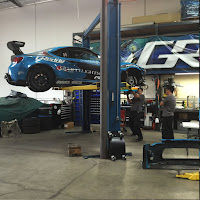 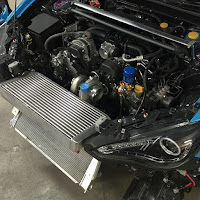 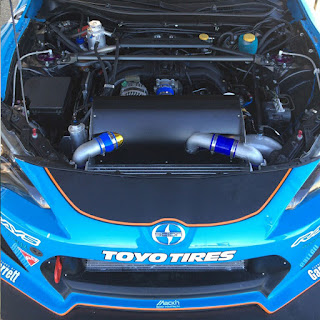 Join us in wishing best of luck and success to the  Scion Racing, Mackin Industries and Evasive Motorsports at Pikes Peak. 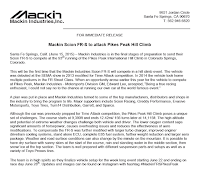 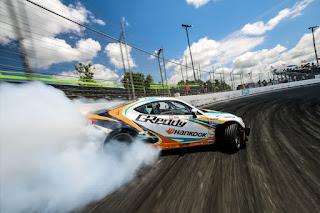 The race week began early, with some round 2, Atlanta repairs and some preventative maintenance at a local shop in Florida, Rivsu Imports.

From there, the Team moved on to the newest Formula Drift venue, Orlando Speed World.  Being a new track, with new challenges, the team worked quickly to get the car dialed-in to Ken's liking.  Although the layout seemed pretty simple, the changeable weather and multiple bumps in the track made it tricky and very hard on suspension components.  The KW suspension proved to be a big advantage in Orlando.

In Friday Qualifying, Ken laid down an impressive 92pt run, which could not be beat. This gave Ken the Top Qualifier spot.  This would also later, prove to be essential in locking down the podium spot over Matt Field, scoring just one point behind in qualifying and finishing 4th.  (“3rd place in the overall competition is decided based on the highest qualifier of the two losing competitors in the Final Four.")


As Saturday arrived, Ken and the Team were feeling confident, but the unpredictable rain could easily complicate matters.  Luckily the weather was perfectly dry for the win against Mohan's 3rotor RX8 in Top32, the Half Time Break and the Opening Ceremonies.

In main 16 bracket eliminations, it started off dry for Ken's lead run against Moen's 2JZ S14, but due to some strange starting line events, the chase run had to wait until after a heavy rain delay.  In the wet, Ken drove a smart follow run to move on to the next round.

In the Best 8 the track was beginning to dry off on the bank, but the infield was still very wet and tricky.  Ken controlled the FR-S perfectly, but Hohnadel in his  V8 S14 was not able to keep control on the wet infield.

This set up the possibility for another amazing Semi Final rematch against fellow Hankook Tire driver Chris Forsberg and his VK-V8 370Z. 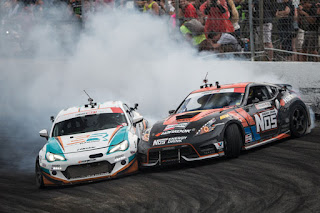 Again there were fireworks with this match up.  Ken drove a strong lead lap, with Forsberg fairly close behind.  In the chase, Gushi decided to escalate the battle and showed incredible proximity on the bank, unfortunately, it might have been just a little too much, when the 370Z gave more angle to exit the bank.  This cause the two to make contact and a huge flame irrupted from the Z, bring out a Red Flag.  (see our instagram for a clip)
Eventually the judges rule against Ken, resulting in a 3rd place finish in Round 3.

Look for the GReddy Team to make a dominating charge at the top step of the Round 4. Wall, NJ Podium later this month, June 26-27.

Ken Gushi and the GReddy Performance x Hankook Tire x Scion Racing FR-S will be back at it this weekend in Orlando, Florida for Formula Drift Rd.3

Until then check out the Scion Racing Driven 2 Drift Chapter 3 with a recap of Rd.2 in Atlanta : https://youtu.be/53GYljOpOig