Ken Gushi podiums round 6 of the Formula Drift Pro Championships.  The Seattle event at Evergreen Speedway and currently sits 5th in the championship, with 2 rounds to go...

After struggling with mechanical issues in the previous Canadian round, the GReddy Racing Team worked furiously on updates to bring a stronger, faster, more powerful GReddy Racing - Nexen Tires - SR by Toyota 86 to closeout the final 3 west coast events. 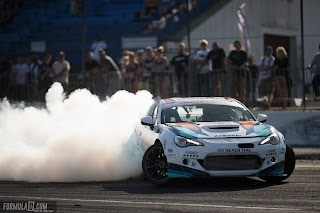 The improvements paid off with a solid Thursday practice and a 6th place qualifying position on Friday.   Ken drove two super smooth runs for scores of 86 and 89pts.  Further fine tuning in the Top32 practice lead to a very competitive package for the #FDSEA tandem eliminations.

In Top32, Ken was matched up against the #27 qualifier, privater, Jeff Jones in his LS-powered S14.  Ken showed a dominate performance to advance to the next round.
(Click here to see a reply of this Top32 battle)

After the Formula Drift half-time break, Ken Gushi's 16 bracket battle was against, Boost Brigade teammate, Robbie Nishida in his twin-turbo VQ-powered G37.  Being good friends and knowing each other's driving style well, Ken gave Robbie an amazingly close chase run, that exited the crowd.   This along with a solid lead run gave Ken the win.
(Click here to see a reply of this 16 bracket battle)

Great8 battle(s) became quite complicated, Ken was almost ready for a solo bye run after his opponent, Tyler McQuarrie and his V8powered Camero suffered a crash in his 16 battle.  But with the unusual amount of OMT battles, that night, the car was able to be repaired enough to run against Ken.  Surprisingly, Ken made a mistake while pulling a large gap on McQuarrie, which sent the Judges to request an OMT battle.  Although the OMT battles were closer, Ken came out with the win for his 3rd Semi Finals of the year.
(Click here to see a reply of the Great8 battle and OMT)

The FDSEA Semi-Finals, was down to 4,  Coffman vs. Forsberg and Bakchis vs. Gushi.   As you can see in the reply below, Ken might have gave Odi too much of a gap on the bank, but he closed the gap for a very competitive chase run.  While leading, Ken drove another solid run with great line and angle.  Bakchis' V8 Genesis also had a close chase run, but seemed to have a big correction at the end of the track.  It looked to be very close and could have possibly gone to a OMT, but in the end the Judges went with Odi.
(Click here to see a reply of the Final4, Semi-Final)

As per Formula Drift rules, the higher qualifying driver, receives 3rd place, placing Ken on the  podium for the 2nd time this season...  Congratulations to 1st place - Bakchis and 2nd place - Forsberg.

With only two rounds to go,  FDTX in the Texas Motor Speedway on Sept 9-10 and FDIRW finale in the Irwindale Speedway on Oct 7-8,  the GReddy Team will push extra hard for that top step on the podium!