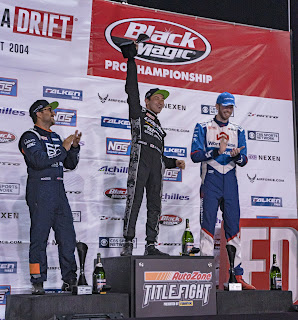 If there is one event on the Formula Drift calendar that all Pro Drift drivers, teams and sponsors want to win, it has to be on the high banks of the “House of Drift,” Irwindale Speedway.  This weekend with a near perfect result, Ken Gushi and his GReddy Performance - Achilles Tire - Toyota Racing 86 achieved this feat with a 2nd place qualifying and the FD event WIN!

Ken’s experience in the series and home track paid off with smooth, high-level qualifying runs and unshakeable precision lead laps all weekend long.
But it was with the support from his FDIRW track team, crew chief - Takeshi Aizawa, spotter Ben Swartz, Billy Bazalar, Meng Tea, Sean Adriano, Kevin Sanchez and Kenji Sumino; Ken was able to adapt throughout the tandem rounds and balance the massive grip and Irwindale tire wear of the Achilles to successful get pass the competition.  Like rookie of the year, Travis Reeder in 16, the aggressive Wothhouse team of Pior Wiecek in great-8 and 3x and current champion James “The Machine” Deane in an epic semi-final battle.

Then finally it was a memorable and emotional finals with Ken’s Boost Brigade / Achilles Tire teammate and 2013 Champion, Michael Essa that really moved new and longtime Ken Gushi fans.   With Gushi in the lead and Essa in the chase, the two had great first tandem lap, but it was the unstoppable Ken Gushi with a risky aggressive chase run with sealed the win with  high pressure follow at the 2019 Formula Drift finale.

It was an amazing night for Ken Gushi Motorsports / Team GReddy Racing to win in front of a hometown crowd.  Thank you all for the support of this team over the years.  We hope to carry this momentum over the off season for an even better 2020. 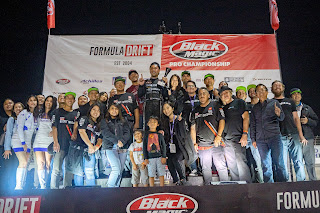 
WORDS FROM THE WINNER

With two Achilles Radial-equipped drivers on the podium, and the announcer building the excitement, Ken Gushi wept with joy when he was announced the winner. Despite finishing second in the Championship in 2015 and recording three podiums as recently as 2016, Gushi – who has competed in the series since its inception – hasn’t won a Formula DRIFT round since Texas in 2005, so his emotion was overpowering. “This is the first year I took over the entire motorsports operations for GReddy Racing, which brought a lot of challenges figuring out logistics, scheduling, prioritizing car development and more. There’s so many factors that can prevent me from being 100% focused on driving, so to be here at the last round of 2019, after overcoming all those challenges, and to be able to celebrate the win with my fans, friends, family and the entire team, is a huge bonus. It was an incredibly challenging year but hopefully we’re going into 2020 with some momentum. I’m very excited today – it’s a day I’ll never forget.”

Deane’s festivities would carry him through the Great 8, where he overcame a strong challenge from Ryan Tuerck, but he would falter in the Final 4 against Ken Gushi. Qualifying second, Gushi was on a mission at FD Irwindale and while he set a very strong lead lap, there were doubts he could match the pace of the newly crowned 2019 Champion in the chase position. However, Gushi defied the odds and doggedly stuck to both his task and Deane’s door, sending the Irishman back to the paddock early. Deane would still claim a third place podium position and the aforementioned 2019 Formula DRIFT Black Magic PRO Championship, so he wasn’t totally despondent. Gushi’s path to the Final started with a bye round in the Top 32 courtesy of his second place qualifying position, followed by a match-up with Travis Reeder (USA) in the Sweet 16. Back at the wheel of Old Red – Reeder’s faithful Napoleon Motorsports / Turn Key / Nitto Tire / Nissan 240SX S13, which was substituting while development continues on his revolutionary electric-powered Camaro EL1 – the newly crowned Rookie of the Year put up a valiant fight but couldn’t match Gushi’s pace or precision.  In the Great 8, Gushi met Wiecek in the second Worthouse / Falken Tire Nissan Silvia S15. Wiecek was fresh from beating Aasbo in a very tight Sweet 16 heat, which was ridiculously close but the Polish driver was given the nod by virtue of better proximity in the chase position. As Gushi and Wiecek went to battle, both impressed the judges on their lead runs but made small mistakes in the chase position. Much to the delight of the crowd, the judges requested OMT.  On their repeat runs, Gushi drifted high on the banking in Outside Zone 1 as Wiecek accelerated hard to gain proximity. Making slight contact with Gushi’s door, Wiecek was then fighting the car as he transitioned off the banking and found himself too deep through Inside Clip 1. Throwing the car sideways, Wiecek was lucky to escape with nothing more than decapitated tail lights and returned to the starting line for run two after a brief check. However, Gushi decided to take his only Competition Time Out at this point in order to refill his nitrous injection bottle. Some onlookers questioned the wisdom of using his only Time Out when Wiecek’s previous run was ruled incomplete and all Gushi had to do was finish his chase run. However, Wiecek wasn’t about to make it easy and again set a blistering pace. Gushi did enough to finish the run and was awarded the win.  After beating Deane in the Final 4, Gushi faced 2013 FD Champion Michael Essa (USA) in the Final. Driving the Essa Autosport / Achilles Tire BMW M3, he had a punishing route through the heats. It began against Rookie Sebastien Gauthier (Canada) in the Top 32. Driving his SSG Motorsport Nissan S14, Gauthier needed to make up ground in the first turn and found himself stumbling over Essa at Inside Clip 1. With Essa spinning out, Gauthier was adjudged to have been the culprit, granting Essa more time to make repairs. Once they returned to the line, Essa struggled to keep pace with Gauthier in the chase position and appeared to be experiencing car problems. Unsure whether his “inactive chase” was the result of the collision or simply a conservative approach to ensure progress to the next stage, the judges called for OMT.  When the runs were repeated, Essa seems to find the right gear, knocking out a strong lead run and better chase run, grabbing the win. Next up was Justin “JTP” Pawlak (USA) in the Roush Performance / Falken Tire Ford Mustang. Always fast and aggressive, Pawlak went hard off the line, leaving Essa in his wake trying to find speed and the correct line. With a clear advantage over his opponent for run two, JTP called a Competition Time Out on the starting line to address an overheating problem. With coolant leaks and a very hot engine, the team was unable to make repairs in time and was eliminated. Things didn’t get any easier for Essa in the Great 8 where he was matched against 2010 FD Champion Vaughn Gittin Jr (USA) in the Monster Energy / Nitto Tire Ford Mustang RTR Spec 5-D. Never wanting to take prisoners, Gittin Jr was all over Essa in the chase position. The pair made light contact in Outside Zone 2 but Essa was able to hold his line and finish a good run. With Gittin Jr in the lead, Essa simply can’t match his pace. Possibly sensing victory, the Mustang driver didn’t drift deep enough through the course. Facing a dilemma, the judges ruled in favor of Essa who had a better lead run. In the Final 4, Essa would start the first run in the chase position against Aurimas “Odi” Bakchis (Lithuania) – the only driver to win two rounds during the 2019 season. Driving his distinctive Falken Tire / Feal Suspension Nissan S14, Bakchis left Essa in his tire smoke as he built a significant gap through the course. Seemingly down on power, Essa’s lead run was clean but resulted in Bakchis drifting wide through Inside Clip 1 and colliding with the safety wall. While there was some speculation that Essa’s car problems may have mitigated the situation, he’d done enough to advance to the Final. With Gushi’s incredible form throughout qualifying and the heats, and Essa’s apparently sick BMW, it seemed as if the result was inevitable, but the 2013 FD Champion wasn’t finished. Essa found an adrenal burst of acceleration for the first run and managed to maintain good proximity to Gushi’s leading Toyota, despite having to make several adjustments to avoid contact. Once Essa adopted the lead position, Gushi found himself tripping over the slower M3, making light contact on the banking and then having to back off through Inside Clip 1 to avoid further contact. As the cars drifted deep through Outside Zone 2, Essa’s BMW span without receiving any outside assistance. And while Gushi had to take avoiding action, Essa’s run was judged incomplete